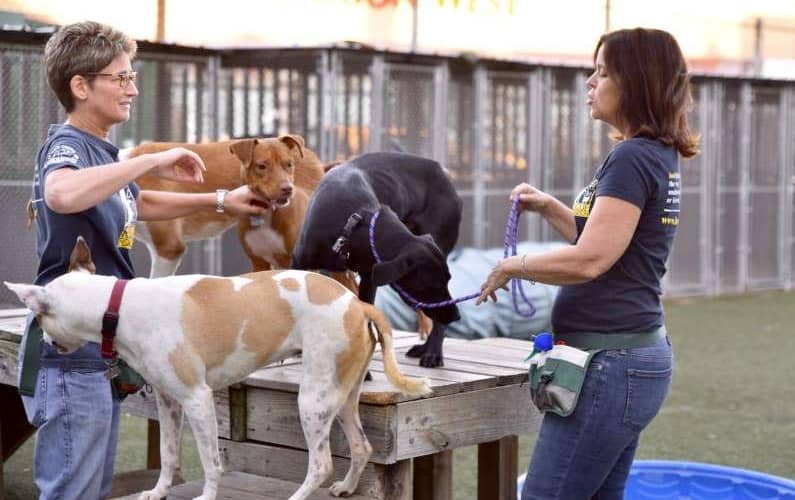 How does this busy animal rescue get by with just 4 full-time employees? It has 300 loyal volunteers.

It’s time for outdoor pup play group at Lost Dog and Cat Rescue Foundation. As with most everything at this Falls Church, Va., pet refuge, it’s a team effort.

“Don’t forget to bend your knees!” says Suzanne Petroni, warning her cadre of helpers that to stand rigidly in the play yard is to risk being bowled over by exuberant dogs as they gallop past.

She interprets canine social behavior for some of the volunteers, alerting them to brewing playground brawls and dismissing some snarls and bared teeth as signs of dogs simply being dogs.

Petroni, 50, spends upward of 20 hours a week leading play groups at Lost Dog when she’s not at her full-time professional job as a consultant on global women’s rights. She is part of a group of nearly 300 active volunteers with Lost Dog, which welcomes animals into the D.C. metro area from crowded municipal shelters and places them in permanent homes.

“It has been an amazing and life-changing experience for me,” she said. “I can’t ever see not coming here.”

Since 2001, Lost Dog has facilitated the adoptions of more than 30,000 cats and dogs or about 1,500 dogs and 500 cats annually. The rescue has a staff of nine employees, only four of them full time, so it’s the volunteers, with their distinct skill-sets and wide-ranging interests, who keep the wheels turning.

Organization leaders say it’s Lost Dog’s people-centered approach that keeps volunteers coming from as far away as Centreville and Baltimore to spend time at the shelter.

Johnson, a digital project director, said she joined the community as an adoption-event handler about nine years ago. But for the past several years, she also has been volunteering one night a week ensuring all the dogs are settled in for the night and the facility is closed up.

The kennel is a home-away-from-home of sorts for many volunteers, including clusters of German au pairs, such as Katharina Sommer, who find comfort at the rescue.

Sommer, 24, who lives with a family in Bethesda, says she misses her Doberman back in Cologne.

“I need my cuddles,” she explained.

She visits Lost Dog three times a week to walk dogs and sees it “as a therapeutic thing.”

“When I get there I can see my friends and interact with the dogs,” she said. “It just calms me down.”

Mother and daughter team Emma Gregory and Kiera Sheppard have been volunteering at the kennel for a year. The Arlington pair, both British citizens, initially became involved in the rescue “because we wanted something to do together,” said Sheppard, 22.

It soon became a near-daily activity for Sheppard, a recent college graduate, and Gregory, 42, who works at the British Embassy. Together they care for dogs at the kennel, foster dogs in their home, help out at adoption events and orient new volunteers.

“We spend all our family dinners talking about dogs we’ve fostered and what’s happening over at the kennels,” Sheppard said.

She stays connected with the larger group through the rescue’s Facebook volunteer page, often posting about one of her foster dogs. The feed is filled with photos of puppies tumbling around a foster family’s backyard, dogventure narratives and comments about individual kennel residents.

One critical volunteer job at the kennel is transporting animals to weekend adoption events at places such as PetSmart and Petco. Dogs and cats need to be picked up from other shelters or the airport.

That’s where Ken Pezzella comes in. The 54-year-old finance executive spends much of his volunteer time behind the wheel of the rescue’s large vans, playing Latin or classical music on the radio to get his crated passengers to settle down. He prefers jobs such as driving, shoveling snow — and showing up at 5 a.m. to process new animals.

“The people at Lost Dog have totally embraced me,” Pezzella said. “I don’t want to describe it as therapy, but it restores my faith in humanity. I hear the other members saying yes, so I say yes.”

Barbara Hutcherson, 52, Lost Dog’s executive director and a former high school teacher, spends about 60 hours a week at the kennel.

“Everyone has their niche,” she said. “Somehow it all works together to make a community. We do animal rescue very well, but we are so much more.”

What keeps her going is seeing how important Lost Dog is not only to the animals, but to the community of volunteers.

“I’ve had people tell me that a foster dog or cat helped them get through a tragedy in their lives, and that it made all the difference to be connected to that animal and these people,” she said. “I’ve had parents come to me after their kids have graduated college and tell me that their child really struggled in high school and that volunteering with Lost Dog on the weekends was like a lifeline.”

Hutcherson says she attends animal-care conferences across the country, and when she talks about her volunteers, people are almost always surprised.

“Not everyone’s been able to build what we have,” she said. “When they ask me, ‘How did you do that?’ I don’t always know how to answer. People want to help and they want to be part of something. When you give them opportunities, tell them you value their presence, and trust that they want to do the right thing, they usually come through.”