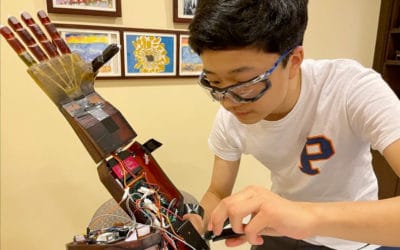 On a personal note:

I’m sorry for my long pause on ‘Three Lines and a Circle’ posts.  To be honest I’ve been overwhelmed by the news of the world and wondered if it was even worth my time and effort.  That being said – I realize that NOW more than ever it is important to keep profiling and highlighting stories from this beautiful Earth that bring awareness to the actions and efforts of people trying to forge ahead in this world with LOVE, GRACE, HOPE and PEACE.

Please enjoy this latest post.  Investing in our young people and encouraging them to grow in their creativity, education and emotional strength is crucial for the future of our world.  We all live here and it is the responsibility of us all to ensure our young have what they need to protect themselves and future generations.

“Be the change you wish to see in the world.” ~ Mahatma Gandhi

Ten years ago, when Benjamin Choi was in third grade, he watched a “60 Minutes” documentary about a mind-controlled prosthesis. Researchers implanted tiny sensors into the motor cortex of the brain of a patient who moved a robotic arm using only her thoughts. Choi was fascinated by the concept, likening it to something out of a Star Wars movie.

“I was really, really amazed at the time because this technology was so impressive,” he says. “But I was also alarmed that they require this really risky open brain surgery. And they’re so inaccessible, costing in the hundreds of thousands of dollars.”

Years later, when the pandemic hit in 2020, Choi—a tenth grader living in Virginia—suddenly found himself with ample free time. The lab in which he’d planned to spend his summer researching aluminum fuels had shut down. But the documentary he had seen years earlier stuck with him, and he decided to use his spare time to build a less-invasive prosthetic arm himself.

In his makeshift laboratory on the ping-pong table in his basement (where he sometimes worked 16 hours a day), Choi independently designed the first version of his robotic arm using his sister’s $75 3-D printer and some fishing line. The printer couldn’t build pieces over 4.7 inches in length, so Choi printed the arm in tiny pieces and bolted and rubber banded it together. In total, it took about 30 hours to print.

While most brain-powered  prosthetics require invasive surgery, Choi’s uses a pair of electrodes and a custom algorithm to move the arm with a combination of brain signals and head movements.  Choi’s invention, which recently earned him funding from MIT, costs just $300 to produce.

“Maybe this sounds a little cliche’,” Choi said.  “but you can really help people I think through engineering, through technology.”

PLEASE continue to donate and support the charities, non-profits, and community groups that are working hard to make a difference and address problems and issues that ring true to your heart locally, nationally and abroad.

In addition to local and regional groups, here are a few of my go-to’s: