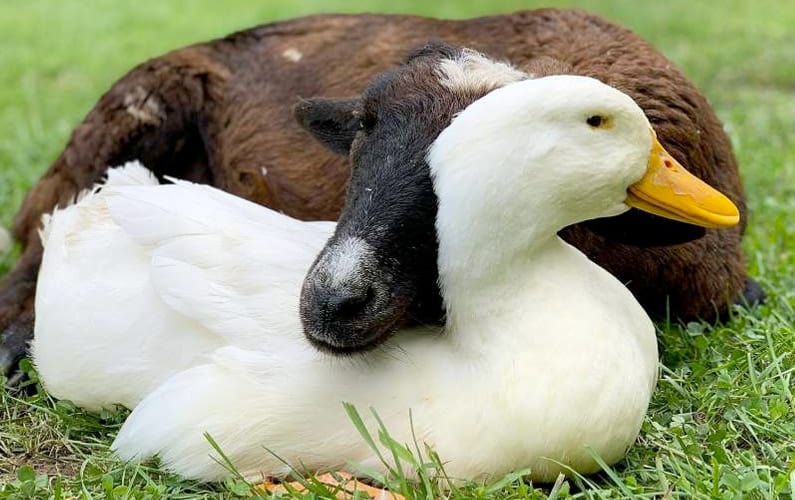 Merlin and Gigi & Goats of Anarchy

Write up by: Kelli Bender / People

Adorable things are happening in the fields of Goats of Anarchy (GOA).

GOA is a 30-acre farm animal sanctuary in Hampton, New Jersey, that is dedicated to the rescue and rehabilitation of goats with special needs, and is home to over 130 animals, including goats, horses, donkeys, cows, alpacas, sheep, pigs, turkeys, geese, ducks, and chickens.

Leanne Lauricella, the founder and president of GOA, has seen many things since starting the non-profit in 2014, but something special has recently taken her by surprise.

Gigi a 7-month-old lamb with an “old soul” has been living with GOA’s blind goat herd and “acts as a mom to some of them.”

“She plays gently with the babies and cuddles the ones who need it,” Lauricella told PEOPLE.

Recently, Gigi, who arrived at GOA hours after her birth, has found that someone else at the sanctuary needs cuddles: Merlin the disabled duck.

“He has an injured leg and is not able to walk. We did try a prosthesis, a wheelchair, and splinting, but none of these options worked for him,” the founder said of Merlin, a two-year resident at GOA. “Merlin can’t walk, but loves hanging out in his pool. You can find him either splashing around, hanging out in his special chair, or sunbathing in the grass with friends.”

It was one day while Merlin was sunbathing on the grass that Gigi decided to make her first move.

“A couple of weeks ago, we spotted Gigi laying next to Merlin in the grass and we thought it was so cute. We weren’t too surprised because Gigi is such a cuddler but thought it was just a one-time occurrence, ” Lauricella said. “But the next day, she did it again.”

Gigi stopped by Merlin’s sunbathing spot for cuddles again and again and again, until it became clear that some quality snuggle time with Merlin was now part of her daily schedule.

“Every day, Gigi visits Merlin out in the grass and curls up next to him,” Lauricella added. “It’s like she is trying to comfort him. At first, he seemed a little annoyed but now he grooms her and snuggles with her. They have developed a friendship and it’s unlike anything we’ve seen on the farm.”

Interspecies friendships on the farm are rare since the animals at GOA are often separated by species for their care, which makes the fact that Gigi sought out Merlin even more heart-warmingly unique.

The ability to witness ridiculously precious moments like this is one of the many reasons Lauricella, who also advocates for animal rights and promotes veganism through GOA, started the sanctuary.

“At GOA, we rescue animals that have been neglected, abused, or discarded. Around 25 of our goats wear prosthetic devices, and we have a barn full of goats who use wheelchairs. We have a herd of blind goats, several blind horses, and even a cow and a sheep who wear prosthetic devices,” she said. “Five of the most challenged goats even live in my house with me. Our mission is to help these animals, but in doing so, we help ourselves and our followers and supporters. Watching these animals fight for their lives and seeing what they overcome is so inspiring.”

Lauricella hopes that GOA’s many supporters will have a chance to see Gigi and Merlin’s blossoming friendships in-person someday soon, but, to slow the spread of COVID-19, GOA is currently closed to the public, aside from regularly scheduled weekly staff and volunteers.

“We hope that this will change in the next few months because we love having visitors. We feel it’s so important for people to experience farm animals in person because our guests are usually amazed at how social the animals are,” Lauricella said.

Learn more about ‘Goats of Anarchy’ (watch this!)

Support & Donate to: GOATS OF ANARCHY

“Because so many people are struggling financially, we are definitely feeling the effects of that. Donations are slowing and like many nonprofits, we rely solely on donations,” Lauricella said. “We promised our animal residents that we would give them the best possible care, and we will do everything we can to fulfil that promise, even during a pandemic. We have been working hard to find creative ways to fundraise using various social media platforms and even virtual tours.” 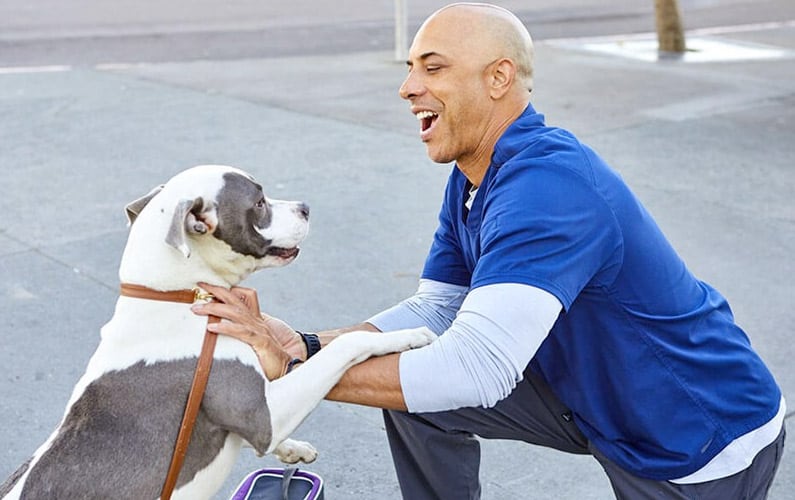 Dr. Kwane Stewart has been a veterinarian for over 20 years. After spending an afternoon offering medical care to the pets of people experiencing homelessness in his area, he learned an important lesson: these animals provide more than companionship to their owners — they also offer love, hope, and security. What Dr. Kwane initially thought would be a one-off experience has turned into a nine-year mission to help pets across Southern California and beyond.