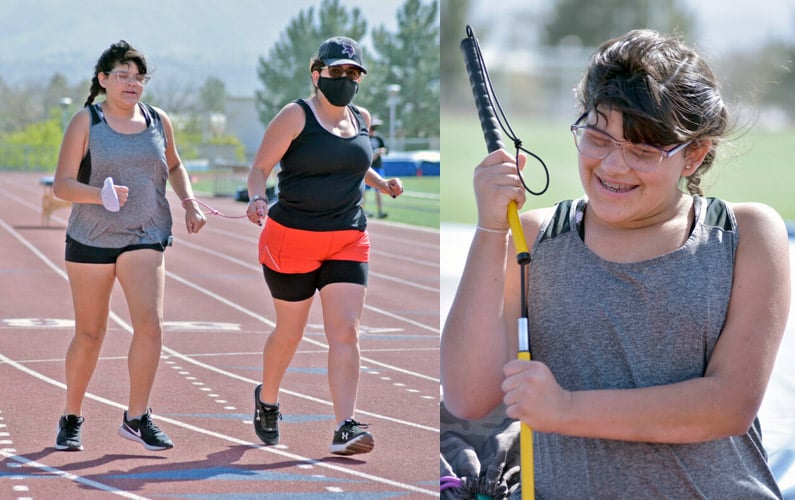 Showing Others How to Shine

By:  Caleb Lunetta / The Signal

As the first track and field athlete who is blind in Valencia High School history, freshman Viking Alexa Canepa has said she wants to use her next four years as a high school competitor to inspire other disabled athletes to participate in high school activities and athletics.

“You’ll shine when you are out there,” said Canepa following her Wednesday workout. “If somebody doesn’t like that, well, just keep doing your thing.”

Canepa said that, since she was born, she has not had the ability to see. Born with Leber congenital amaurosis, an eye disorder that primarily affects the retina, she does not ever remember having her sight.

However, when entering high school for the first time, and after having played a specialized version of soccer designed to be played alongside people with similar disabilities, the 14-year-old incoming freshman wanted to take advantage, and be a part of, her school’s sports culture.

“It was a bit rough at first, but then it was good,” said Canepa, when asked how her transition from junior high to high school, with a COVID-19 pandemic thrown on top of it, went. “First of all, I had to get so many Braille assignments and get so many accommodations made. But finally, they worked it out, and I was so excited when my mom told me that I would be able to do track.”

In order to compete, Canepa and her dad had to come up with a solution to how she could race. Her father had been her eyes on the soccer field in years previously, but track and field would require a new assistant.

Together they devised, from a length of jump rope, a tether that could be anchored to Canepa’s running partner, Bernadette Cisneros, an aide who had been asked during her job interview with the district if she would be interested in assisting the athlete who is blind.

“I just basically guide her, make sure she doesn’t get hurt,” said Cisneros. “And I guess when we work out and do this, I’m kind of her part-time coach.”

Whether at a meet or working out in practice, Canepa and Cisneros, with the ends of the tether each wrapped around their arms, run together — Canepa on the right and Cisneros on the left.

“When we’re running, I guide her to stay on her side,” said Cisneros, “But this is all her.”

For the next four years, Canepa says she plans to continue running for the team as one of its competitors in the 200-meter and 400-meter races. And the next four years she’ll use a “white cane” (hers is colored in Valencia’s purple and gold) during her school day, and the tether system during the afternoon competition.

“She has an older brother and sister that went here, and her sister was a cheerleader and her brother played baseball, but you can tell she’s got older siblings because she has a great attitude,” said Valencia’s track and field coach Mike Pontius. “She works hard, she comes down and does her workout, and I think this is the first time she’s run organized track.”

Pontius added that it’s not only he and the fellow track coaches who admire the work Canepa has put in to her races, but her fellow teammates, as well.

“They were cheering for me as I was running by,” said Canepa, when reflecting on her first track meet last week. “They were saying, ‘Good job! You can do this!’ and like cheering me on as I ran past them.”

Although she says the first meet showed her the things she needs to improve on, Canepa said she’ll continue to compete and participate to the best of her ability.

“I got into track because I really like running,” she said. “And I feel like it’s a really fun way to get outside, especially during a pandemic.”

be kind . be grace . show compassion