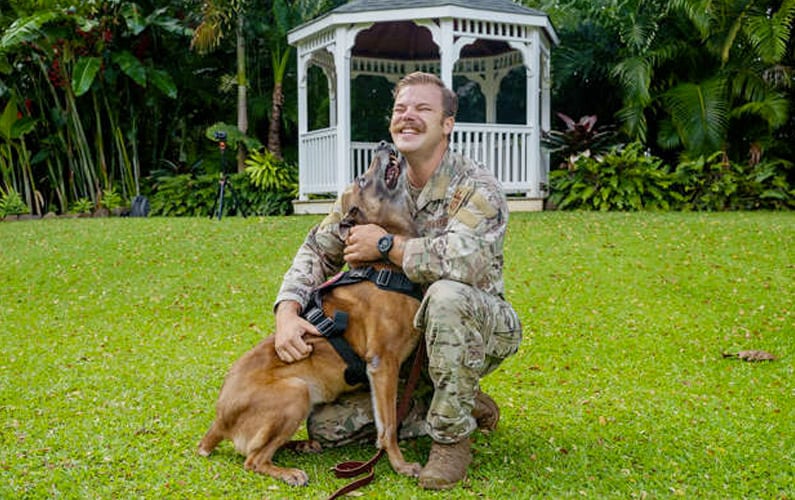 American Humane reunited both Army Veteran Michael Stepnovich and U.S. Air Force Staff Sergeant Wade Alfson with the military dogs they worked with overseas. Not only did each man get a hug from their canine partner again, Stepnovich and Ssgt. Alfson both adopted their former patrol pals since the dogs are retired from active duty.

Ssgt. Alfson was the first to see his old friend again, reuniting with Xxanthe, the Belgian Malinois, after a year apart in Honolulu, Hawaii — where Ssgt. Alfson is currently stationed — on May 5. The pair served together for 18 months, including two tours in the Middle East on classified missions, where the duo worked to find improvised explosive devices (IEDs). Now, Ssgt. Alfson is thrilled to have the opportunity to adopt Xxanthe, his best friend, and give her a comfort-filled, love-filled life.

Along with Ssgt. Alfson, Xxanthe will be sharing her life with Kyra, a six-year-old Belgian Malinois that Ssgt. Alfson adopted after the dog failed out of military training because she was too startled by loud noises.

“Now that she’s retired, I mean, what a place to be retired into!” Ssgt. Alfson said of Xxanthe’s new Hawaiian home. “Just the beaches in Hawaii. I live two minutes from the beach, so Xxanthe, me, and my other dog will just take trips to the beach, hang out, just vibe in Hawaii.”

In May (2021), Stepnovich reunited with Popeye the military dog. The two served together for 18 months in South Korea. The partners put in 2,000 hours doing patrol missions but went the past five months without seeing each other before meeting again in Las Vegas.

“It was a lot of emotion. He looks amazing. It was a really emotional moment for me. I couldn’t stop smiling. It’s only been a few months for us, which is lucky, but it feels like it was a very long time,” Stepnovich said of the reunion. “I was just overwhelmed with joy to see him again.”

It is clear that Popeye missed Stepnovich. The 7-year-old German shepherd started showing signs of severe separation anxiety and was taken off duty after he and Stepnovich originally parted. The military retired Popeye early, allowing Stepnovich to adopt the dog. Stepnovich is looking forward to caring for Popeye and hopes to work with dogs in the future as a trainer or handler.

“Having him back in my life is going to be absolutely amazing. I’m so excited to just show him the area and take him on my adventures because I like to get out and do stuff here in Vegas,” Stepnovich shared.

American Humane, the country’s first and largest humane organization, made these reunions possible through its military program dedicated to protecting the dogs that serve the United States. One way the organization cares for military canines is by placing the pooches with their former handlers once they retire. The bond between dog and handler is often unbreakable, and both humans and canines benefit from getting the chance to enjoy their friendships in everyday life.

It is common for military dog handlers and their pups to get separated or reassigned, making it hard for handlers to keep track of their canine partners. American Humane helps military dog handlers find their former partners and adopt them when they retire, guiding the handlers through the complicated and daunting process of transporting the pooch to their home. The organization also helps cover post-retirement medical care for the canines and travel expenses.

“American Humane is thrilled to bring these heroic military dogs home to reunite with their best friends. Xxanthe and Popeye bravely served our country, and we are honored to give them the beautiful retirements they deserve. As we observe the upcoming Memorial Day and May’s Military Appreciation Month, American Humane encourages everyone to celebrate the incredible military heroes on both ends of the leash,” Dr. Robin Ganzert, the CEO of American Humane, said in a statement.

be kind . be grace . hold space for each other