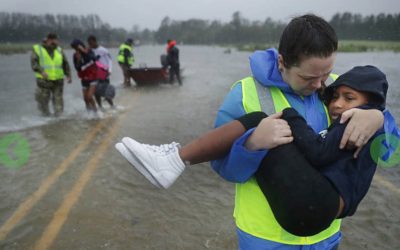 I want to dedicate this post to the heroes of Hurricane Florence.

From the brave members of our United States military and national guard, to local police, fire, rescue, paramedics, etc … THANK YOU for your continued service and efforts. From the municipal and county utilities and government workers laboring around the clock to provide services and aide; to the medical staff, emergency facilities, and hospitals charged to saving lives … THANK YOU.   To the churches, synagogues, mosques, and community centers offering their time and love to provide shelter and food to those in need …. THANK YOU. To the animal shelters, kennels, and rescues who are taking in strayed and abandoned animals … THANK YOU.

There are simply too many to list here, and the crisis is still going on so this list will most certainly grow, however I wanted to profile a few stories I have found that have moved me.

Amber Hersel (pictured above) is a civilian Volunteer from Indiana who came to find herself in North Carolina, along with a group of 20 volunteers. She is apart of the Civilian Crises Response Team, an Indiana-based volunteer group that responds to natural disasters and local emergencies and accidents. Hersel and the other volunteers in her group rescued 75 people. See story links below.

Another such civilian group participating in the heroic rescue efforts in Florence’s wake include the Louisiana Cajun Navy who rescued stranded residents in New Bern and other cities as storm surge waters rapidly filled the roadways and flooded homes. The Louisiana Cajun Navy’s Mission (as stated on their website): RESCUE, RELIEVE, REBUILD. “From the under privileged, the homeless, and all veterans in this country, we won’t stand by and watch another person suffer, struggle, and fight for their lives, while the world passes by”.

Southern hospitality doesn’t stop in times of crisis.  The owners of Good Boy Hotdogs of Delco, North Carolina set up a roadside stand under the protection only of their umbrella to provide a hot meal to anyone traveling by in need of food. https://www.facebook.com/eyewitnessnewscharleston/videos/hurricane-florence-heroes-grilling-free-grilled-hot-dogs-in-tropical-storm/233722940631853/

On a larger scale Chef Jose Andres set up his World Central Kitchen shop in Wilmington. Their kitchen is full of volunteers cooking food around the clock to be delivered to shelters and emergency workers in flood-stricken areas.
Famed Chef Jose Andres Rallies ‘Heroes’ to Cook Amid Florence’s Floods
By Asher Klein / NBC Chicago 5

Hospitality and charity has spread throughout the region as many people in neighboring areas have been offering shelter and lodging to evacuees.   Robert Riker, Leah Van Buren Bolten, Jim Gregory, and Mary Jackson – four such households outside the flood zones are providing refuge to families in need. “We’ve fled our share of Hurricanes. And we know the cost of staying in a hotel and having to eat out can quickly add up at a time when anxiety, fear and uncertainty is high,” Riker told CNN. He and his family live in Waynesville, North Carolina – in the western part of the state.  “We just want to offer some relief to someone who has greater worries going on in their life than I do. We’re all in this life together. And we only have each other to rely on,” he added.

Read More:
These People are Opening their home to Hurricane Florence evacuees
By Gianluca Mezzofiore / CNN

As people fled for their lives they were faced with the conflict and challenge of where to take their animals.  Many shelters, animal hospitals, and kennels outside the flood zones have been offering their spaces to provide temporary homes for pets in need.

Camp Bow Wow South Asheville: “We have capacity for another 40 and 50 dogs,” the camp said. “We have already received one request from a nursing home from the North Carolina coastal region for 10 dogs or so.”

Another group of animal rescuers arrived in North Carolina from Big Fluffy Dog Rescue of Nashville, TN. They have saved about 30 dogs and cats from shelters in the path of the hurricane. “We got back in at midnight. It was about 24 hours round trip, so not too bad. Luckily we had some awesome volunteers meet us at our kennel facility to help unload, walk, feed and settle all the fur kids in,” Tiffany Carol Fintel, a Nashville vet technician, told CNN.

Here are a few more Uplifting Stories of Every Day Heroes:

HOW YOU CAN HELP

I join the masses in thanking all of the people who are stepping forward to assist, provide, donate, and care for others in their time of need. YOU embody the spirit of humanity and the strength of love.
YOU are PEACE.