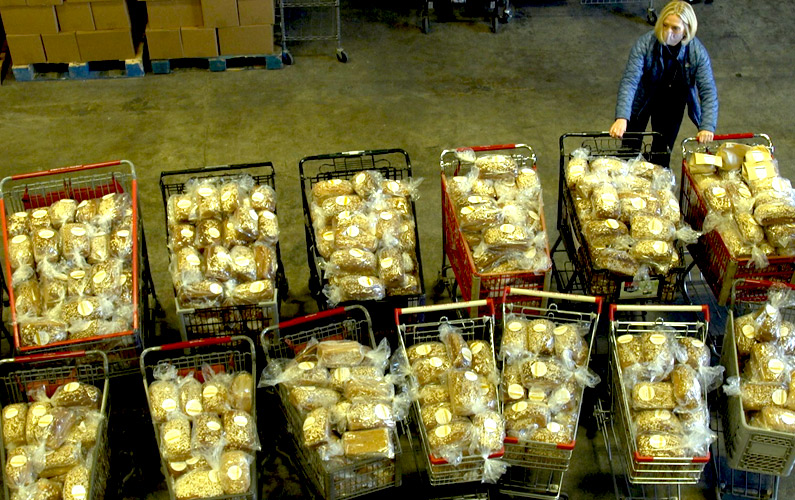 Community Loaves has been on a mission to donate home-baked bread to a local food bank.

By:  By Kerry Breen and Adam Kaufman/ Today.com

More people are cooking at home than ever during the pandemic, and in Seattle, more than 500 home bakers are taking an extra step to give back to their community.

Led by college administrator and avid baker Katherine Kehrli, Community Loaves has been on a mission to donate home-baked bread to a local food bank.

Kehrli, who uses her home as a staging area for the ambitious project, told TODAY’s Dylan Dreyer that the effort has grown from a small initial donation to the delivery of over 1,300 loaves of bread.

“Bread’s been around for a long time,” Kehrli said. “It’s four simple ingredients: flour, water, salt, yeast. But it’s been around for thousands of years, and each time someone discovers it for the first time, it’s like magic.”

Kehrli and other members of the group have developed a simple formula for honey oat loaf bread, which uses locally sourced flour. Each batch of the recipe makes four loaves of bread; volunteers are encouraged to donate three loaves and keep one, in what Kehrli calls an effort to “thank them for their time while (also) paying it forward.”

The loaves are donated by the carful to Hopelink, an area food bank that has reported surging demand during the pandemic.

“When I think of my childhood, my baba, my grandma used to make the best homemade bread,” Matthew Campbell, the associate director of food programs at Hopelink, told Dylan. “That reminds me of this. You can see smiles through masks. You still can. You can see the eyes go up. (With) 600, 700 loaves of bread now, that’s 600, 700 smiles.”

Sarah Gannholm, a home baker involved in the effort, said that in addition to helping out her community, the project has given her a new opportunity to bond with her father.

“I haven’t been able to see my dad for several months, so I got this idea that I would get my dad to buy a KitchenAid (mixer) and buy some bread pans,” Gannholm told Dylan. “He’s not a baker. He’s never made anything but chocolate chip cookies in his oven, or a turkey. It just seemed like a natural thing for us to get on Zoom and do this together, and all of a sudden he’s giving back to (the) community in a way that he’s never done in his life.”

Kehrli, who also didn’t start baking until late in her life, said that the project gave her a moment of connection with her grandmother Ruth before she passed away in August at the age of 105.

“When I visited her this summer, this project was going, and she wasn’t eating very much, but she would eat bread,” said Kehrli. “She loved the bread, and she told me that if the project had existed when she was baking bread that she would have loved to participate.”

“(This project) has restored my faith in the collective good that we can actually do,” Kehrli said. “And it restores my faith that we can be more self-determined even in the face of the pandemic.”

…  and OF COURSE we need to include their famous recipe and info for making Community Loaves’ ‘Honey/Molasses & Oats Pan Loaves’.

For the written recipe see instructions on video page under ‘show more’ HERE.