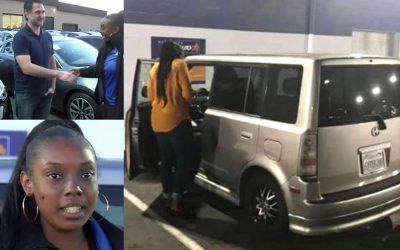 So much better than a trade-in

When you need to hear stories of people just doing good things for other people …  here is one for you.  My favorite part is said by Dan Laguardia, “if everybody did that (kindness) for everybody else, we’d be in a much better place.”

Helping another  – a tale of kindness

Kayla Cooper and Dan Laguardia were strangers before they crossed paths in an auto dealership. Laguardia was there to trade in his old vehicle, and Cooper was there in hopes she could somehow buy a car.

Kayla works two jobs on top of attending nursing school, and while the car salesman tried to be helpful, she did not have enough money for a down payment. “I would have to literally pull a needle out of a haystack to try to get myself a car so I could get to work,” Kayla explained. She had been borrowing cars from friends and family, and she was starting to feel like it would never happen for her.

Dan Laguardia, who had overheard the exchange between Kayla and the carsalesman, felt he could to do something to help. He asked the car salesman to call her back to the dealership so he could give the car he had intended to trade in. He realized it would be more valuable to her than it was for him.

“That gives her a bit of a jumpstart in life. Which, if everybody did that for everybody else, we’d be in a much better place.”

“I told her”, said Laguardia, “I overheard what happened, I’ve got a car that you might like,” adding, “this has no strings attached.”

“I am still in shock. I was crying,” Cooper said. “A car is helping me so much right now.”

Kayla is keeping in touch with Dan since the unexpected act of kindness. She doesn’t know how she will ever repay him, she said. Luckily, she doesn’t have to.

“If I was her, I would’ve wanted somebody like me to do it,” Laguardia said. “I have been in situations where a little hand up would have been nice. I just figured it was me being what I wanted in my life.”