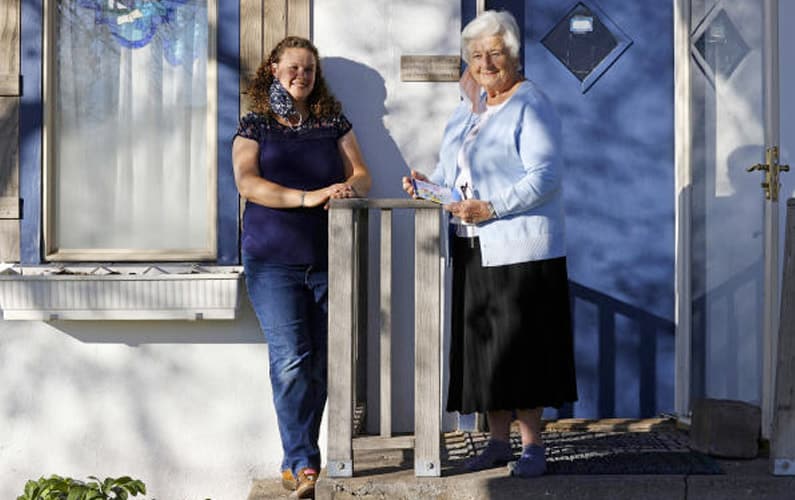 Blooms and Friendship – being there for one another

When the coronavirus upended daily life, Amy Baird was frightened, like much of the world — for her children and what would become of their school and friends, for her in-laws in their 70s, for her own health marked by a pulmonary embolism.

“I hate COVID,” her 4-year-old son became fond of saying, begging to hug his grandma, confused by the bright streamers in the driveway marking a safe distance for their brief, touchless outdoor visits.

On a spring day that would change two lives, the dispirited 38-year-old drove a familiar road near her home in Spanish Fork, Utah, where tulips had bloomed for years. This time, though, she caught her breath when she saw the hundreds of vibrant red and white flowers along the gentle slope.

Maybe the world would make it after all, she thought.

“It was almost like: Life is going on, the flowers are still blooming, life is coming back after winter,” said Baird, an adjunct professor at Utah Valley University.

When she heard Hallmark was giving away greeting cards to encourage connections in an increasingly isolated world, she knew she wanted to send one to the mysterious gardener.

A little sleuthing led her to the nearest house and the likely tulip planter, 79-year-old Marjan Martin Curtis.

Baird selected a card with a simple, fitting sentiment: “What you do matters.”

“You take care of this little area along the road and, you might not know it, but it impacts people,” Baird wrote, unaware that the elderly widow was battling Stage 4 cancer, undergoing taxing radiation treatments and growing increasingly despondent.

Curtis and her late husband had planted the Netherlands’ distinctive national flower for years in honor of her native country, where her family hid children fleeing Nazis in their barn during WWII.

Nature has always been her healing balm, a place to escape. Decades ago when her 4-year-old daughter was kidnapped and rescued, five years ago after the death of her husband and now still, in a pandemic, she finds hope in the craggy rocks and calming waters.

Even these days, she’s known to take off on a whim to explore Red Rocks or Canyonlands National Park, hiking along streams and exploring the ruins built into canyon walls where the desert varnish has darkened the pictographs.

“It takes my troubles away,” she said.

She hadn’t realized that her tulip field would have the same effect on others.

Curtis had been feeling particularly down when Baird’s letter arrived. She’s been extra cautious during the pandemic and hasn’t seen much of her six children. The cancer had recently spread to her pancreas and remaining kidney, which she prays she won’t lose and be forced onto dialysis.

“My heart just warmed up. It almost brought tears to my eyes. It was almost like she knew I needed human contact because I was so isolated and so alone. And then I got this card and I thought, ‘There are people out there that care, so don’t give up.’”

Curtis typed a heartfelt response a few weeks later and the two developed a fast friendship.

Baird sent more letters; they exchanged numbers. Baird texted pictures of her kids carving pumpkins. At Curtis’ urging, she stopped by in person, dropping off homemade brownies and talking briefly from a masked distance.

“I just adore her the more I get to know her,” Baird said. “We need each other right now more than ever. Everybody is going through a difficult time.”

Curtis sent Baird a book about her family’s rescue efforts during WWII, and Baird was inspired by her resilience and adventurous spirit.

“The fact that she was experiencing pain and loneliness and sadness and that I was able to write a simple letter that made her feel appreciated, just that power,” Baird said. “It’s made me feel better and helped me move outside myself because life had been so hard.”

Curtis ordered more tulips in August but wasn’t strong enough to plant them, so the women from Baird’s book club took over. They planted the first batch Tuesday and her 4-year-old even helped pile up the dead leaves.

In the spring, amid the uncertainty of life under the pandemic, the field on the gentle slope will come alive again with a kaleidoscope of tulips — a reminder of the power of hope and the bond it created along this Utah road.

You don’t want to miss this video!

Click the image below to see story and update …

be grace . watch out for each other .