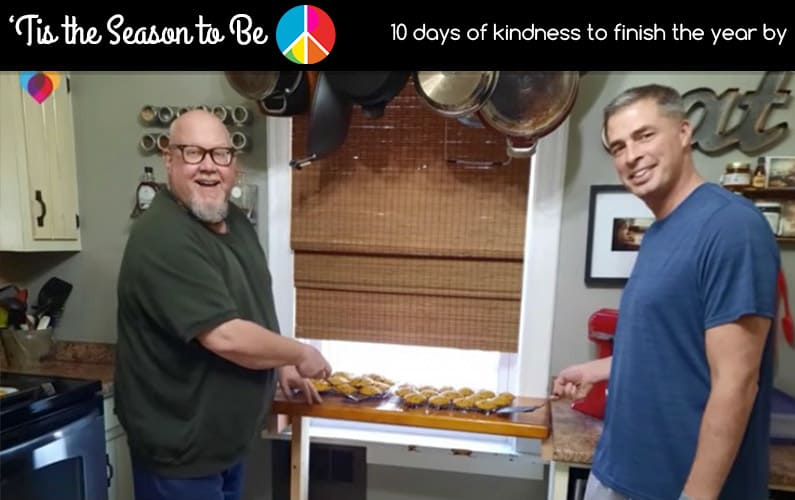 Like many Americans, Scott McKenzie was furloughed at the start of the pandemic, but told himself he’d stay positive and try new things. “I spent my entire career in college athletics, so I did what I tell my athletes to do. When you get knocked down, you stand up,” said McKenzie, who lives in Huntington, Pennsylvania.

Little did he know, his friend of 15 years, Jeremy Uhrich, was at home baking with his two sons. “I just made a simple post back to him: ‘I think my cookies are going to be better than yours, let’s have a bakeoff.’ He replied and said he wanted to do it.”

The dads agreed to a cookie competition, judged by the town’s mayor. When a dark horse entered the race, it was all over for the two dads: one of Uhrich’s student athletes, Rachel Kyle, used her grandmother’s recipe and won.

They may have lost the bakeoff, but McKenzie and Uhrich put their cookies to good use.

“We delivered to some local police, and some local fire departments, went to a local grocery store and went up to a local hospital… It was just no more than thanking them for what they had been doing and working under very difficult and trying times,” Uhrich said.

“And we said, ‘That was fun. That was easy. Let’s do it again,'” he continued. Wanting to deliver more baked goods to essential workers, the dads started a Facebook group called Cookies for Caregivers.

Within days, hundreds of people joined, with about 40 volunteers offering to bake.

Each week, McKenzie and Uhrich choose about six bakers from their list of volunteers to make treats. Then the men deliver the goods to different local businesses and first responders. For 40 weeks straight, they have taken treats to Penn Highlands Huntington Hospital.

Cookies for Caregivers hasn’t stopped since — and it’s even expanded. The men told CBS News volunteers in other states have started their own local chapters, and there has even been some international interest, which moved both of them.

“Jeremy and I from the very beginning hoped that this would grow from something that we do here in Huntington, Pennsylvania, to what could happen across the country,” McKenzie said.

What started out as a friendly competition turned out to be something life-changing, Uhrich said. “You know, if this pandemic were to end tomorrow, why do we have to stop? Why does it take a pandemic for individuals to do something special like this? It shouldn’t be that,” he said.

“Right about now, who doesn’t need a hug? When things get tough, expand your hug, make it bigger,” he said. “And then, collectively, you’ll get through it, I think in a better way.”

Be Kind . Be Grace . Give From Your Heart