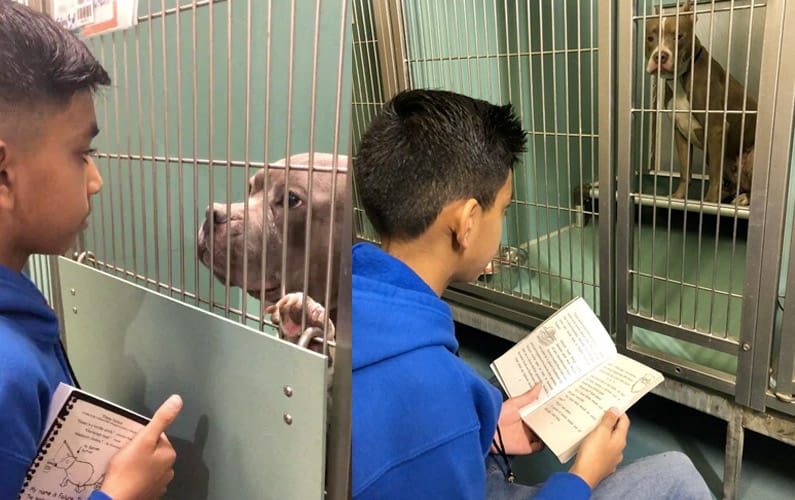 Evan Bisnauth admits he doesn’t always have the most attentive audience when he reads books aloud to shelter dogs at Animal Care Centers of NYC: There are yowls and barks, and sometimes, a dog will fall asleep on its back with its legs in the air.

It was the summer of 2019 when Evan’s mom, Amanda Persaud, heard about Books With Boroughbreds, an Animal Care Center program that encourages children to enhance their reading skills by reading to abandoned dogs. She took the bus with her son the following weekend from their home in the Bronx to the shelter in Manhattan.

“I spent five hours reading to every dog on the first day,” said Evan, who is now in sixth grade. “After that, I wanted to go every weekend.”

When the coronavirus pandemic put his Saturday visits on hold last year, Evan decided to start a Facebook page, EB and the Pets, where he could post short videos he’d made of dogs that needed homes.

Even if he couldn’t read to the dogs, perhaps he could help them to get adopted if he told their stories, he said.

The shelter supplied Evan with photos of dogs that were most in need of adoption and he got to work making videos with help from an app. The most recent one on his page is a video a shelter made for Myna, a 9-year-old black and white dog with some medical issues.

He also made a video for Marco, a pup in need of an emergency adoption.

“Marco is hoping for a helping hands and holding on to the dream that someone will give him a second chance,” he wrote in the post that accompanied an animated video of him interviewing the dog. “He’s scared and losing faith and will need someone to continue with training at a slow but steady pace,” Evan continued. “He requires an adult only single dog home. Please click the link in the bio to learn more and share his story!”

Another video that featured a dog named Freddy received nearly 2,000 views after it was shared by several pet adoption charities.

“He is social, friendly and has engaging conversations that will make you want to know all about him,” wrote Evan. “[Freddy] is charming and quiet — he is a lover of human and cats and is looking to make his life all about you.”

All of the dogs featured by Evan quickly find new homes or are picked up by other animal rescue organizations, his mom noted.

“Either way, they get a second chance,” said Persaud, 39. “Evan tries to never let them down.”

Evan was honored last month as ASPCA’s Kid of the Year — an award that he hopes might inspire other people his age to help shelter animals in their own communities.

“Helping dogs has brought me a lot of happiness,” he said. “If everybody would read to dogs and try to get them adopted, think how much difference that would make in the world.”

But there is still an abundance of dogs in shelters waiting to be adopted across the country. The most recent numbers from the ASPCA, from 2019, show at the time there were 3.1 million dogs living in shelters across the United States.

“It’s remarkable to see the calming effect his reading has on each dog,” Weinstock said. “The dogs can sense that he’s there just for them, and there is a visible reduction in their stress level.”

“Evan’s dedication as a junior volunteer has given hundreds of dogs a taste of what it would be like to live in a home curled up with a good book and a best friend,” she added.

Persaud said that she and her husband, Edward Bisnauth, noticed Evan had a special knack for communicating with dogs at a young age. He would snuggle next to the family’s pets and practice his reading skills in soft and soothing tones, she said.

“When he started reading to the dogs at the shelter, I noticed that he’d make the effort to find out which dogs needed the most help,” said Evan’s mom.

“He’s found something that he loves and he’s very dedicated to what he’s doing,” she added. “As a parent, I find that really admirable. The only problem is that he now wishes he could bring all of the dogs home.”

Evan said he knows that isn’t possible, so he’s aiming for the next best thing.

“Someday, I want to have my own animal rescue and I’ll take in every dog I find that needs help,” he said.

“I’m still going to read books to them,” he added. “Every single one.”

be kind . be grace . be compassion