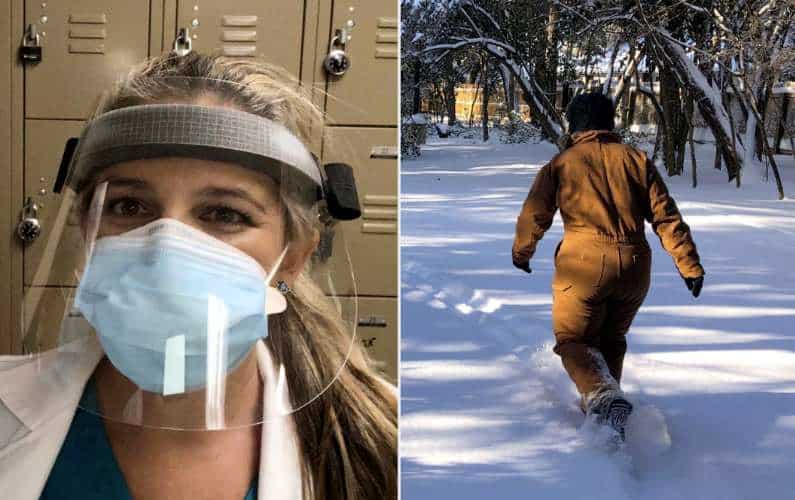 Texas Nurse and Mom Stays Behind to Help Neighbors: I Had to ‘Make Sure They Were Still Alive’

In a matter of days, many of Emily Grigsby’s neighbors have become her patients.

The 39-year-old nurse has been tending to the elderly residents in her Austin neighborhood over the last week when freezing temperatures caused by Winter Storm Uri hit Texas. As millions of Texans have endured rolling power outages amid the icy storm — which, in many cases, cut off their access to heat — they have also had to deal with water shortages, leaving them without ways to drink or wash themselves amid the coronavirus pandemic.

Early Thursday afternoon, Grigsby had to travel through the 32-degree weather to reach an elderly neighbor who was burned after she melted snow to refill her toilet.

“We’re now melting snow on the stove to flush out toilets with, and she accidentally poured the pot of boiling water on her leg,” Grigsby — a mother of two boys, age 9 and 12. “It’s getting kind of crazy around here.”

Grigsby says power in her area was restored late last night after having been off for a total of 110 hours over the course of the past week. At one point, the power had been out for 72 hours straight. As of Thursday afternoon, there were still over 350,000 without power in the state, according to PowerOutage.us, down from nearly 3 million on Wednesday, per the Texas Tribune.

“I’m really thankful, I’m literally seeing the light now, in more ways than one, so I’m really grateful at this point,” she says of the progress that has been made. “But the lack of water is now becoming an issue — we’re still cut off. It’s very, very frustrating.”

Just as the storm hit last week, Grigsby — who has lived in Texas her entire life and has never seen a storm such as this one — says she and her family had no idea how desperate things were going to get. During one of their first nights without power, she and her boys played music on their piano in the dark and made forts in the living room, sleeping by a fire. She and her husband, Will, were trying to make the most out of a situation they thought would be temporary.

“I just continued to try to reach out with limited battery service to whomever I could, to let them know we were still down,” she says while explaining that her neighborhood was not showing up on a power outage map. “Then I started checking on my elderly neighbors once that 24-hour mark passed, and that’s when I found how dire the situation really was.”

“It made me very aware that we had to stay to help,” she added. “There were opportunities for us to leave and it just wasn’t an option anymore. And that’s the sad part for me, a lot of my neighbors didn’t have the means of staying warm.”

Grigsby and her family have done what they can since then, such as bringing three meals a day to a neighbor who uses a wheelchair.

“We’ve been feeding her since last Thursday, three meals a day,” she explains. “I think the worst was telling my boys I needed to go check and make sure that our neighbors were okay and do pulse checks every morning. And make sure they were still alive. … A lot of elderly that have no means for warmth, no food, it’s just a really sad situation.”

The devastation from the recent winter storms across our Country, and in particular Texas, is so profound that at this moment we can’t fully comprehend the suffering or fear people are experiencing or how long it will take to get back to some sense of normal.

HOW YOU CAN HELP: