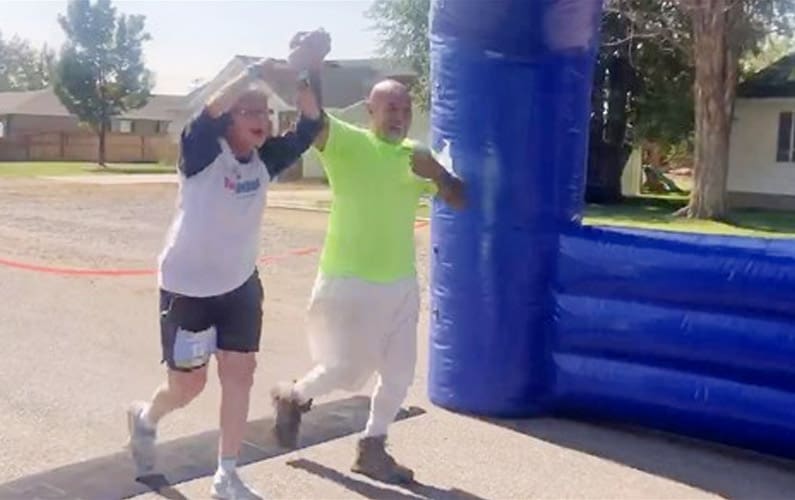 Woman finishes 68th marathon with the help of prison inmate on work release.

SALT LAKE CITY — On Oct. 3, Carrie Kelley of Sandy toed the line of the Beaver Creek Marathon. Four miles into the 26.2-mile trek, Kelley found herself struggling and thought about tapping out.

It was at that moment, however, when Kelley heard some footsteps behind her. Those footsteps belonged to a man — a prison inmate out on work release — who would end up running the remaining 22 miles with her.

According to Beaver Canyon Marathon race director Amy Albrecht, there were a few inmates from the Utah Department of Corrections who were, with the supervision of a correctional deputy, charged with the task of setup and cleanup efforts at the event.

Kelley said Fidel Ybarra noticed that she was struggling and kept herself moving forward, and having him by her side got her to the finish line.

“Without Fidel’s help, I wouldn’t have been able to finish,” Kelley wrote in a Facebook post. “I was that broken and injured. Fidel isn’t a runner but he’s one of those people who is a true athlete. He ran 22 miles in old work boots and long johns in the hot sun with no prior training. … I saw how much pain Fidel was in, but he wouldn’t quit because he didn’t want me to run alone.”

Ybarra agreed that running the 22 miles was very difficult, but he said that when he saw Kelley running all by herself in the back, that he felt as if he could relate. He wanted to help any way that he could.

In a statement given through the communications director of the Utah Department of Corrections, Ybarra wrote the following:

“As people progressed through the marathon, we would pick up discarded clothing as well as trash,” Ybarra wrote. “While walking and talking with the deputy that was supervising us, a name came up of a dedicated marathon runner, Carrie Kelley, who was running in the Beaver Canyon Marathon, but due to some injuries she was having a hard time running. She was the last runner and we eventually caught up to her.

“I am not sure why I began running with her, but I think maybe I saw a little bit of myself and other inmates in the situation. We are normally left at the back and left to our own devices. I could tell how much she enjoyed running, and I felt like I could not let her finish the marathon alone. I did not know that once I started running, 22 miles later we would cross the finish line. I could have stopped and jumped in the work van with the deputy that was following us, but something kept me going. I feel like by the end I was in more pain than her, but the feeling of accomplishment was more than I can describe in words.”

I don’t know his past mistakes, but what he did showed his true character.–  Amy Albrecth, Race Director

Albrecht was there to witness the two cross the finish line and said that it was one of the moving moments she has ever seen.

“Watching the two of them cross together had everyone in tears,” Albrecht said. “It was so moving, and one of the neatest things I have ever seen. I don’t know his past mistakes, but what he did showed his true character. We were able to find his mother’s address to send her his medal, because he deserves it for what he did that day.”

The Beaver Canyon Marathon was Kelley’s 68th marathon, and she said it was her most memorable because of the kindness shown to her by Ybarra.

“Fidel has really kind eyes, but underneath he’s got this gritty determination to finish the job no matter how hard it is,” she wrote in an email. “I just can’t say enough about how much Fidel helped me out when I was mentally and physically at one of my worst moments in my life. This had been a year of failure and disappointments, as it has been for so many people, and the thought of dropping out of this race would’ve been one more failure for me. Then Fidel came along and made what could’ve been the worst day of my life into one of the best days ever! He’s got a special place in my heart.”