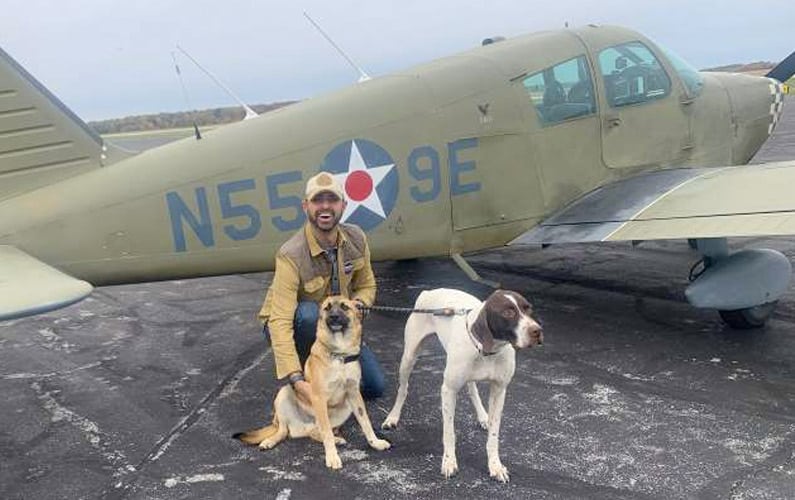 Eduard Seitan has flown more than 40 rescue missions as a volunteer for the nonprofit Pilots N Paws.

In 1992, Seitan immigrated to the United States from Romania when he was 19 years old — and didn’t speak a word of English. He worked construction for a few months before landing a job as a food runner at the Italian restaurant Club Lucky since he spoke Italian.

Over the next few years, he learned English while being promoted to server and eventually head server. In 1997, one of the bartenders asked if he wanted to help open a restaurant, and he became a partner in One Off Hospitality Group, which opened the Michelin-starred restaurant Blackbird and eventually 10 other Chicago hot spots, including Avec, The Publican and Big Star.

Then in March, the coronavirus pandemic forced restaurants to close for dine-in services. Seitan and his partners stopped drawing salaries but still had to furlough more than 700 employees. Two of their restaurants, including Blackbird, permanently closed.

The One Off Hospitality partners hosted seminars and worked hard to help their employees receive unemployment, but the layoffs were “devastating.”

“It was so hard for us to actually tell someone who’s been with us for 20-plus years, ‘Sorry, I don’t know when we’re going to reopen,’” he told TODAY. “The uncertainty was terrible.”

The restaurant industry has taken a hit not just in Chicago but across the country. According to a survey released by the National Restaurant Association last month, more than 100,000 restaurants have closed on a permanent or long-term basis during the pandemic.

Seitan, 48, dreads the winter months, when it will be too cold for diners to eat outside — a trend he’s begun noticing with cooler fall weather — and the possibility of another shutdown as COVID-19 cases spike. His restaurants are already struggling to cover mortgage payments while operating at 40% capacity and offering takeout.

Luckily, Seitan found an unusual way to cope with these challenges. He owns an old airplane — “Most cars on the road cost a lot more than my plane,” he quipped — and two years ago, he started volunteering for the nonprofit Pilots N Paws.

“Flying is my really happy place,” he said. “Since the pandemic started, because of the extra time I had on my hands, I have been flying a lot more than usual. But now, I only fly with a purpose for Pilots N Paws.”

Pilots N Paws is a nonprofit network of volunteer pilots who fly dogs and cats at risk of being euthanized to no-kill rescue organizations and foster families across the United States. Seitan has personally flown over 40 pets to safety for the group.