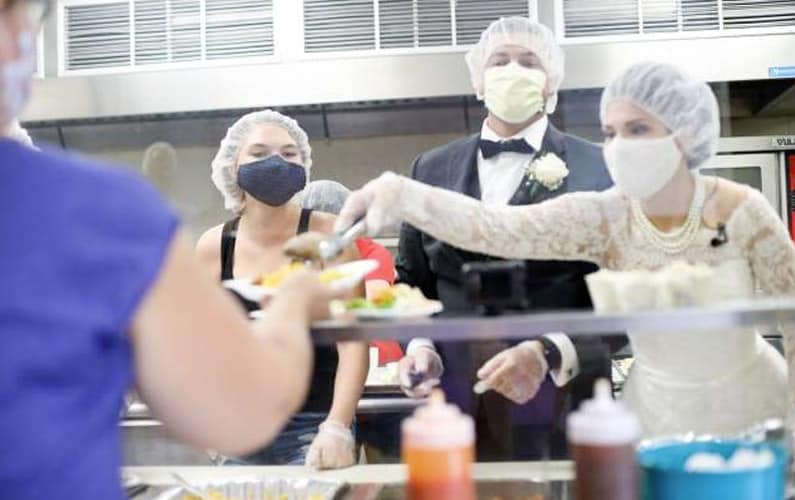 When Tyler and Melanie Tapajna of Parma, Ohio, realized they wouldn’t be able to host dozens of guests at their planned nuptials this summer, they decided to cancel their formal reception and decided to put the money they’d spent on food to good use.

On July 1, after months of planning, the Tapajnas decided that a big wedding during a pandemic was not for them. They were nervous about hosting 150 people at their original venue, The Lodge at Allardale, which was open — but only under very strict regulations.

“We had everything planned down to the linens,” Melanie Tapajna told TODAY Food.

Tapajna and her then fiancé decided to plan an intimate ceremony for family and close friends on Aug. 15. They had already pre-ordered food from their favorite local food truck and caterer, Betty’s Bomb Ass Burgers, but instead of getting a full refund, they decided to do something special.

The Tapajnas contacted Laura’s Home, a nonprofit that feeds and houses homeless women and children in Cleveland, and asked for permission to donate prepared food. Lena Brown, who owns Betty’s, then worked directly with the kitchen manager at Laura’s Home to figure out what prepared, kid-friendly food on her menu would work best for the cafeteria-style kitchen.

While Tapajna and her husband were happy to donate, their only request was that they could help serve it to residents on their wedding day.

“It’s not unusual for us to have meal donations at our facilities,” Rich Trickel, CEO of The City Mission, which operates crisis centers in Cleveland, told TODAY. “What made it completely special is that from their wedding ceremony, Melanie in her beautiful gown and Tyler in his tux, put on a hairnet and gloves and served the guests.

“I mean who does that? An unbelievable act of generosity and compassion.”

Trickel said he was thrilled to welcome the couple into shelter, which currently houses about 145 single women and several pairs of mothers and their children. Though the rest of the Tapajnas small wedding party could not come to the center due to COVID-19-related restrictions, residents were invited to come eat (in socially distant groups) and celebrate the newlyweds.

Tapajna told TODAY that the money they had already paid Brown to cater their wedding covered the cost of so much prepared food that the shelter was able to feed its residents for several days after her wedding day.

Tapajna told TODAY that she and her husband have donated to a charity every year since they met at a friend’s wedding in 2016. Finding a meaningful cause to contribute to during a pandemic, when many people’s misfortunes have only exasperated, just seemed fitting.

This time was different, however, since it was the first time the couple was able to witness everyone’s reactions in person. Plus, it was their first major event as man and wife.

“I asked Tyler what his favorite part of our wedding and he told me it was the amount of smiles that it brought,” Tapajna said. “Not only was it the women and children, but the volunteers and workers (who) were happy to see everyone enjoy themselves.

She added, “Of course, getting to marry my best friend was one of my favorite parts.”

After serving food from the kitchen, the couple took off their gloves and hair nets and joined the dining room to meet everyone, which Tapajna called “the biggest blessing.”