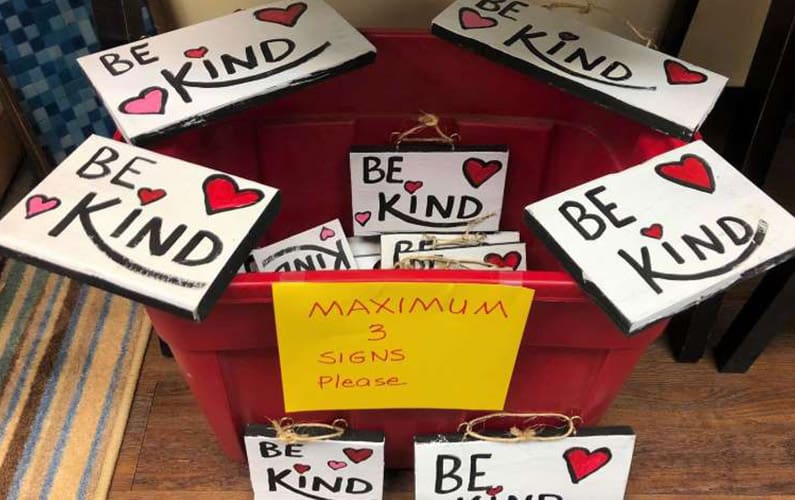 Messages out into the universe.

A kindness movement that soars across the nation via Ginni Bonnell’s angels has taken flight in the Tri-Cities area.

During this unprecedented time when people are fighting for equality and weathering COVID-19, ‘Be Kind’ signs remind individuals to treat others like they themselves would like to be treated.

“Love, love, LOVE how the message of kindness is spreading in the Petersburg area,” said ‘Be Kind’ founder Bonnell of Richmond.

“Ginni started making ‘Be Kind’ signs a few years ago as a way to cope with all the negativity and polarizing messages around us,” said Crystal Phelps of Colonial Heights. “She handed them out to friends and neighbors which spiraled into many others following her lead as a way of making someone smile. Her idea exploded into schools, front yards, porches, and businesses across the world.”

Bonnell’s “Be Kind” message has been trending across the globe since 2018 as a result of repurposing a whiteboard she found tossed in the trash while on a walk. Wanting to encourage acts of kindness, Bonnell wrote positive messages on the board she placed in her front yard.

Drivers honked as they drove by her sign which inspired Bonnell to keep promoting positivity after the elements took its toll on her beacon of light. To replace the worn-out, miniature billboard, Bonnell painted “Be Kind” along with a red heart on a piece of wood she had discovered in her garage.

Before long, the two simple words which pulled on the heartstrings of those passing by became highly sought after by others who also wished to promote kindness.

When I asked how many signs she has given away for free since the first one, Bonnell responded, “I can’t tell you how many signs. I’ve lost track, but thousands have gone out into the Universe.”

According to Bonnell who is in her 60s, “Be Kind” signs are displayed in every state in the U.S. and in 38 countries.

Go and Be PEACE in your Community