Jumping In to Help Another 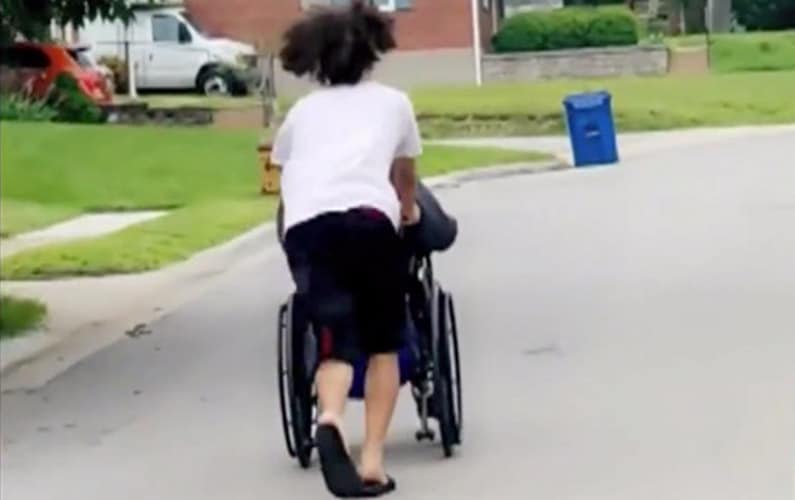 ST. JOHN, Mo. – In the midst of severe weather Tuesday, a St. Louis teen’s efforts to help a man in a wheelchair stuck in the storm’s path is touching hearts across the metro area.

Gregory Beck was leaving Schnucks on St. Charles Rock Road in St. John when the tornado sirens starting going off.

“Everyone kept telling me the storm is coming and you need to hurry up and get home,” said Beck.

Beck lost both his legs within the last year. Diabetes also caused him to go legally blind. He can’t drive, so he pushes himself up and down a hill to his home.

He says drivers were honking and yelling at him as he tried to cross St. Charles Rock Road. He made it to a nearby gas station when a car pulled up.

“This lady and her son were hollering at me like ‘are you okay?” Beck said. “Very lovely lady driving and her son. Just the greatest people and very concerned about other people, which America needs to start doing more of.”

Seth Phillips, 16, jumped out of the car and began pushing Beck’s wheelchair up the hill to his home.

“We need to be caring for each other and helping each other out,” said Phillips.

Beck says without Phillip’s help, it would normally take him about 25 minutes to get up the hill. He has to stop as many as 10 times to rest.

“My hope is that other teenagers will see that it’s the cool thing to do, you know, it’s good to help other people. It doesn’t make you uncool to stop and help someone who needs it,” said Seth’s mom, Amber Gilleylen.

Gilleylen initially recorded video of her son pushing Beck to share with her mom. She posted the video on Facebook and was surprised to see it shared dozens of times. She says she is so proud of her son for wanting to help, noting it’s not our of character for him.

“His only complaint was ‘it makes me sad that people would rather fly by and honk at a disabled person rather than to lend a hand,” said Gilleylen.

Beck says he’s very thankful for their help and that even the smallest acts of kindness can mean a lot.

“You don’t have to give them money, just doing a kind act. Instead of shooting somebody, give them a kind act,” said Beck.

Phillips calls Beck his friend and hopes to re-connect soon.