Making it home with the help of a stranger 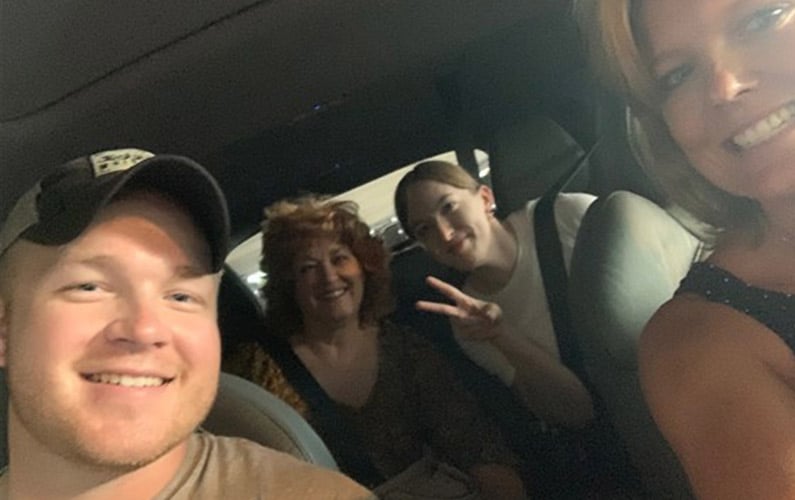 Thanks to the kindness of a complete stranger, a U.S. military dad was able to make it home to see the birth of his first child.

Sgt. Seth Craven had been serving at a NATO base in Kabul, Afghanistan for the past three months as a member of the West Virginia National Guard. After being denied numerous times for leave, he finally got permission to be by his wife’s side during her scheduled cesarean section.

Craven started his journey home to Charleston, West Virginia on Aug. 4 but ran into travel troubles during the last leg of his journey.

For two days, connecting flights from Philadelphia, where Craven landed from Afghanistan, to West Virginia were canceled, and no car rentals were available after a rough storm had passed through the area.

“With all these setbacks, I really felt like he wasn’t gonna make it,” Julie Craven, Seth’s wife, told TODAY. “I was just very scared that I would have to go through this experience alone.”

“I know how much it meant for him.” she shared. “We had miscarried a few times, so this really was a life changing moment for both of us.”

Just when he thought that all hope was lost, Craven was approached by Charlene Vickers, a programs director for AmeriHealth Caritas Partnership. From the Philadelphia area, Vickers had to get down to West Virginia for a company event, so she offered him a seat in her car since no flights seemed to be making it out of the airport anytime soon.

“He was sitting on the ground with his back up against the wall and he had his arms draped and his head down,” Vickers told TODAY.

“Once I learned that he had been traveling since Monday from Afghanistan to get home for his wife’s pregnancy, I knew I had to do something,” she said.

“I can remember giving birth like it was yesterday,” the mother of two daughters, Ryan and Hannah, explained. “If my husband hadn’t been able to be there, it would have devastated me. And the way Seth lit up when he talked about his wife, I just knew I had to get this guy home.”

“It humbled me,” Craven said of Vickers’ gracious offer to give him a ride. “It made me realize that if I accept help from others, it will make the things you can’t control easier.”

Craven joined Vickers, along with her two co-workers Eryn Glassey and Maureen George, and they started their eight-hour drive from Philadelphia towards Charlotte.

Through more storms, lots of laughs and a few rest stops, the jam-packed car arrived just past midnight on Friday, Aug. 9.

“He fell on his knees and put his head and hand on my belly,” Julie Craven recounted her husband’s homecoming. “We were both in tears. He is a very strong man so for him to kind of crumble like that I know that getting here had been such a struggle for him.”

After their tearful reunion, the pair left for the hospital a few hours later. At 7:56 a.m., they welcomed their son, Cooper Owen, to the world.

“Holding him that first time, it changed everything for me,” Craven explained. “They tell you how important it is, but nothing can prepare you for that moment. That baby looking back at you, it takes over everything.”

Craven says, “I want people to see how much good there still is left in the world. Hopefully, if someone sees Charlene’s good deed, they will pass it on and pay it forward.”

Vickers believes that these good deeds are the things people will be remembered by.

“That’s what life really is about,” she said. “It’s not so much about how much money you make or what you accomplish. It’s about trying to be a good person. These are the things people remember. These are the acts that people will remember you by.”