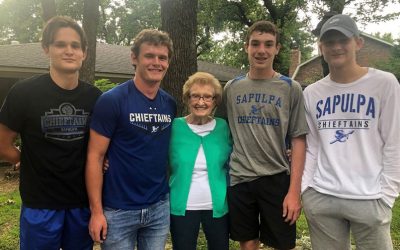 Four high school football players from Sapulpa, Oklahomo, executed a real Hail Mary play last month, when they ran into a burning home and rescued a 90-year-0ld woman.  The boys were passing by the home when they spotted the fire and rushed in through a back door.  Nick Byrd, 14, found Catherine Ritchie in a smoke-filled hallway, picked her up, and carried her outside.  In a heartfelt blog post, Richie’s daughter Missy Ritchie Nicholas thanked the teens “for being the kind of young men who thought about another person above themselves”.