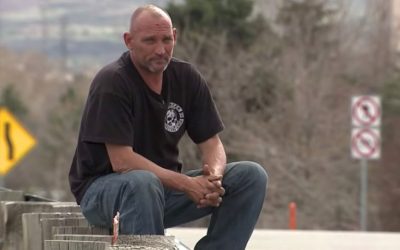 Darin Barton was at his usual spot near a freeway exit in Lakewood, Colorado when a semi-truck suddenly barreled over and smashed into rush hour traffic in a burst of flames.  The homeless man asked a nearby friend to call 911 and then took off running toward the blazing multicar pileup.  Barton, 45, said he was able to pull three or four people from their vehicles, joining several other good Samaritans who helped with the rescue effort.

“I just did what I hoped anybody would’ve done if [(they were)] sitting down there,”  Barton said.