Delivering the Sprit of the Holiday 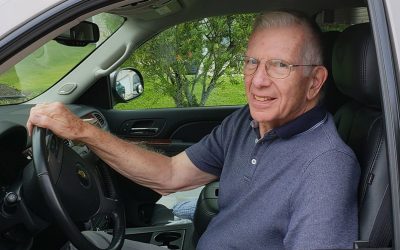 Here is a special Christmas PEACE Post for you.  This article really touched my heart and shows the amazing impact the act of giving of your time can have; a beautiful message for the Holiday Season.

Wishing you joy, laughter and most of all PEACE this Holiday.

This retiree has driven 64,000 miles helping low-income students get to college
By:  Karen Weese / Washington Post

It was a few days before Christmas, and Paul Goetchius looked like a dad picking up his daughter from college — greeting the smiling young woman outside the dorm, tossing her backpack into his SUV, then easing out from the line of parked cars onto the snow-covered interstate.

They weren’t even his kids.

In the past eight years, Goetchius, 76, a retired environmental toxicologist from Syracuse, N.Y., has logged a jaw-dropping 64,368 miles driving low-income college students to and from universities all around his state for holidays, spring break, summer break and more.

That’s equivalent to driving around the globe about two and a half times.

He’ll drive pretty much anywhere in New York: He often takes students to and from the University at Buffalo (a five-hour round trip, unless there’s snow) or the Rochester Institute of Technology (also five hours), and has even delivered them to and from State University of New York at Plattsburgh, up near Lake Champlain (an eight-hour round trip). The only place in the state the former farm boy won’t drive is New York City — too much traffic.

Goetchius makes each trip in a single day, often on back-to-back days to make sure everyone gets home in time for a holiday or back to campus in time for the start of the next semester. He makes stops at Dunkin’ Donuts or Burger King for breakfast or lunch, always his treat.

“I don’t ask, I just tell them that’s what I do,” he said, adding that he keeps a printout of the restaurants along his routes on a clipboard so the students can pick where they want to eat.

The first student Goetchius ever drove to college, other than his own kids — he and his wife have three grown children, plus five grandchildren — was a young woman studying nursing at the University at Buffalo in 2010.

He had seen an article in the local paper about On Point for College, a grass-roots nonprofit in Syracuse that helps disadvantaged kids get to college.

“It said they were looking for volunteer drivers,” he said. “I thought, ‘Well, heck, I can drive a car.’ ”

He so enjoyed their conversation during the three-hour ride that he decided to sign up again. Eight years later, he’s still at it, and that first rider is now a physician.

He’s willing to take more than one student at a time, but he prefers just one because there’s better opportunity for real conversation.

“I just love driving, and I love these kids,” he said. “There are programs for everything, and I’m not really a program man. But I like to drive, and it’s such a blessing and a privilege to be a part of these kids’ lives, even just for a few hours, getting to know them and hearing their stories.”

“I’ve given rides to college to kids who were living at the homeless shelter or on a relative’s couch,” Goetchius says. “Some of these kids are incredible, what they overcome to get to college.”

He once gave a ride to a University at Buffalo student who told him the story of how, as a little girl in Rwanda, she escaped armed men who were trying to kill her and her family. He drove her to and from college over the course of four years, and when she graduated, she became a special-education teacher.

Goetchius spends about $1,000 a year on gas but insists that he comes out ahead in the long run because he has so much fun building relationships with the students and learning about their lives. He also dispenses occasional advice.

There are some students he has driven a dozen times or more, he said. By the end of their college careers, many call him “Grandpa.”

One such student, Nira Irby, now 26, got rides from Goetchius to and from Buffalo State College all four years she was in college because her family didn’t have a car.

“It’s not just a ride, you’re not just sitting there in awkward silence or with your headphones on,” said Irby, who now works for Microsoft in Syracuse. “He asks you questions and actually remembers the answers, so the next time you ride with him, he’ll check in on those things.”

At times they’d have serious conversations about her writing aspirations or family struggles. During her first few years of college, her mother was recovering from open-heart surgery while still trying to care for Irby’s four siblings, and money was tight. But they also spent a significant amount of time laughing, she said.

“My mom was always a very strong supporter of me mentally and emotionally, but sometimes finances weren’t always there,” she said. “So having a ride, having that one big thing taken off my plate, by someone who cared — it was so important to me, more than he knew.”

Janette Salloum, 26, who also rode with Goetchius to and from Buffalo State, said he “is a pure, genuine soul.”

“Paul always made us laugh and would inspire us to reach for what we wanted,” said Salloum, who now works as a visual merchandiser for Target in Houston.

When he takes students to college in the fall, it isn’t just a matter of plunking their suitcases on the curb and whizzing away, especially if they’re freshmen.

“Sometimes their key doesn’t work, the registration didn’t go right, there are things to take care of,” Goetchius said. “So there are times I have stayed much of the day to help them get those things worked out.”

When one student’s off-campus housing turned out to have neither air conditioning nor window screens, he went to Home Depot and bought a set of expandable window screens, which he promptly installed.

He always finds the students through the On Point for College website, which helps remove obstacles for low-income students who want to go to college. Organizers create a list of students who need rides, generally about 100 to 150 students at a time, and include information such as which college, the dates they need to arrive, and specifics such as times they should get there for an on-campus job or sports practice.

Volunteers look over the website and sign up to give rides. Other volunteers include retirees, business people, teachers, a dentist and even a former mayor of Syracuse.

Transportation to and from college is a bigger obstacle than many people realize, said Samuel Rowser, executive director of the nonprofit.

“What happens when a low-income student gets a full scholarship to Cornell University but has no one to give him a ride to get him there?” Rowser said, adding that that’s where the drivers come in.

Irby, the student Goetchius transported all four of her years, said she’s not sure what she would have done without Goetchius’s rides, his humor or his humility.

Click to learn more about On Point for College and how you can help.