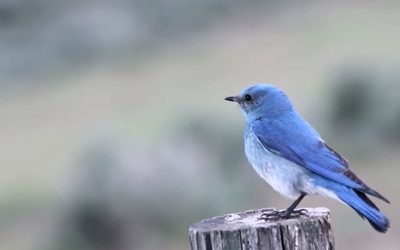 This is a story about a man who found himself on an unlikely mission in his later years of life – helping to rescue and preserve a diminishing population of indigenous bluebirds.

In the 1800’s European Starlings and House Sparrows were introduced to North America and they quickly thrived in their new home, spreading rapidly across the entire continent. An intense competition for nesting cavities began between these newcomers and the local bird species, and one such local, the bluebird, lost the battle. Slowly bluebirds have decreased in numbers. In the mid 1900’s conservation groups like the North American Bluebird Society were created to address the risk of extinction to certain bird species and ‘citizen scientists’ were recruited to aide in the efforts to help.

This is where an amazing man by the name of Alfred Larson, who (at age 96) has spent the last 30 years doing his part to help make sure there are bluebirds still around today. When Al was 60 years old, an age when most people start seriously thinking about slowing down, he began building bluebird boxes. Today Larson has built over 300 boxes for the Southwest Idaho area, setting them up along five different ‘bluebird trails’. During the nesting season he travels over 5,000 miles visiting the boxes, maintaining and repairing them, and marking the occupants for research. He records the number of eggs in each box, measures each chick after they hatch, and bands the birds once they are large enough so that their existence can be recorded. Once the bluebirds leave the nest he cleans out each of his boxes and preps them for the next year’s new arrivals. Larson keeps meticulous records and to date he has banded more than 30,000 western and mountain bluebirds.

There is so much more to this story and the man behind it. A beautiful film (watch below) was made by profiling Al Larson and his tireless efforts to do his part for our world. Take a moment to watch it –it will inspire and encourage you.

Stories like Al Larson and his years of volunteer service to a cause he saw a need to help is a wonderful example to us all. It is both an inspiration and a call to action. Let Al’s story inspire you to find a need in your community that you can fill.

Giving back is one of the greatest gifts we can receive.

Source Reference:
We Should all be more like the ‘bluebird man’;
By Crista Worthy/ High Country News