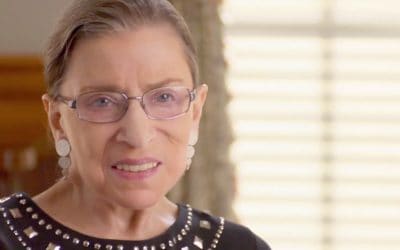 No matter what side of the political aisle you are on it is commonly acknowledged that Supreme Court Justice Ruth Bader Ginsburg has been and continues to be a pioneer for women.  Her journey to where she is today at age 85 is nothing short of amazing.  She has overcome obstacles and challenges, faced powerful people head on with a fearless determination, and has done it all with a sense of grace.

Ruth Bader Ginsburg started her career path attending Harvard Law School in 1956 after graduating from Cornell University.  As a freshman she and 9 of the other female law students were invited to dinner at the home of the Law School’s Dean.  At that dinner the Dean asked the young women why they were choosing to take up 9 of the 500 seats at the prestigious Law School that could have been given to a man? Even with that negative welcome to her new school Ginsburg was undeterred.  “You felt in class as if all eyes were on you and that if you didn’t perform well you would be failing not only for yourself but for all women”.   Ginsburg finished her education ranked first in her class at Harvard Law and Columbia Law where she transferred her senior year and graduated.

It was the love and support of her husband and life as a mother to her daughter that carried her through challenging times as she forged ahead as a woman in a primarily male structured world.  Even though her reputation and skills were of the highest level she was turned down by 14 law firms.  In 1972 Ginsburg became a law professor at Rutgers School of Law and Columbia Law School,  and founded, amongst other gender equality programs, the Women’s Rights Project where she took on cases of gender discrimination.  “Our strategy was to go after the stereotypes that were written into law.”  She realized success in the courtroom and won a series of landmark cases that changed the legal landscape for women in the United States.  In 1980 she was nominated as one of the first female judges on the federal appeals court and in 1993 President Bill Clinton nominated Ruth Bader Ginsburg to the highest court in our land where she was confirmed and has served ever since.

Learn more about Justice Ruth Bader Ginsburg: History Channel,  and if you want to see her strenuous work out watch HERE (she’s no wallflower!), and HERE.

OH and don’t miss on Christmas Day “On the Basis of Sex”.
Watch the trailer below: