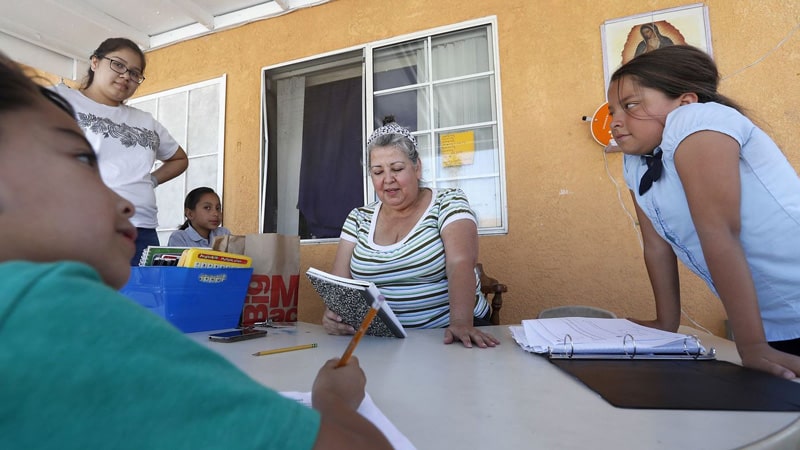 On May 13, 2018, in the Los Angeles Times writer Steve Lopez posted this Mother’s Day story of Juana Jauregui, also called ‘Mom’ and ‘Grandma’ by many of the children she cares for in her home daycare in East L.A.  Juana found a need in her community to help provide a safe and secure place for children to seek refuge, support, and love.  “Every child that enters her home is fed, clothed, bathed, cared for” said Daniel Noriega, Juana’s son and a student of Steve Lopez at Cal State L.A.  In a paper Daniel wrote about his mother, “La mama de East L.A.” he tells the story of his sister and her former boyfriend named Mario.  Mario came from an abusive home and struggled with drug addiction.   The more Juana found out about the abuse of Mario and his siblings she was determined to try to help him straighten out his life.  “I never gave up on him because I don’t think it’s fair for kids to have to go through this, and I’m learning there are a lot of kids like him.  There are gaps in the system that these kids fall into, and nobody cares.  Nobody cares,” says Juana.

When Mario and Juana’s daughter broke up Juana continued to be a support to Mario, helping him with food and counsel whenever he reached out to her and she keeps a letter Mario wrote her saying he believed that he would one day be the man she told him he could be.  “I want to thank you,” Mario wrote, ” for always being there when I had no place and no one to depend on”.   Sadly Mario’s life ended in August 2014, the circumstances of his death are still unclear.  Juana was the person contacted by the County morgue and it soon became her task to locate Mario’s mother to discuss funeral arrangements.  Mario’s mother was located but was only able to raise a small amount of money to help pay for her son’s funeral costs.  Juana in turn paid several thousand of her own dollars to purchase a coffin and arrange for the services;  Donating one of her four family plots so Mario could be laid to rest.

During the process of handling Marios funeral arrangements she saw how families facing such tragedy are often struggling to pay for the most basic of burials.  To that end Juana decided to start a nonprofit called Mario’s Caskets to raise money for such familes and donate caskets to them.

Mario’s Caskets Mission Statement:
As an organization, we believe that every person deserves to be buried with dignity and respect, regardless of their situation or lifestyle.

Our mission is to donate a casket to low-income families of individuals that, at some point in their life, have been in the foster care system, have experienced homelessness, and have struggled with alcohol, drug, sexual or physical abuse.

​We pledge ourselves to provide a standard blue casket; the same model that was used for the burial of Mario, whom this organization is named after, without regards to gender, race, ethnicity, immigration status, religion, physical or mental ability, gender expression, marital status, or sexual orientation.