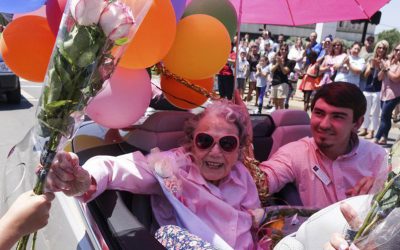 On June 21, 2018 in Stillwater, Oklahoma, Myda Lewis (age 107) lived out a birthday dream.  Earlier in the week she had been asked by her hospice worker what she would like for her upcoming 107th birthday?  Her reply, “I want to be happy”, adding that she had always wanted to ride in a convertible like she was in a parade.  Word around the city spread and on Myda’s big day hundreds of confetti-throwing residents gathered on the 5 blocks of Stillwater’s Main Street to cheer on the birthday girl as she road in a convertible wearing a tiara, pink sunglasses, and a sparkling studded sash.

“We’re out today because what a fun thing to celebrate!” said Toni Ivey, an attendee of a sign-making party in preparation of the parade. “I mean, who gets to turn 107? And if she wants to have a parade by golly, we’re going to give her a parade!”