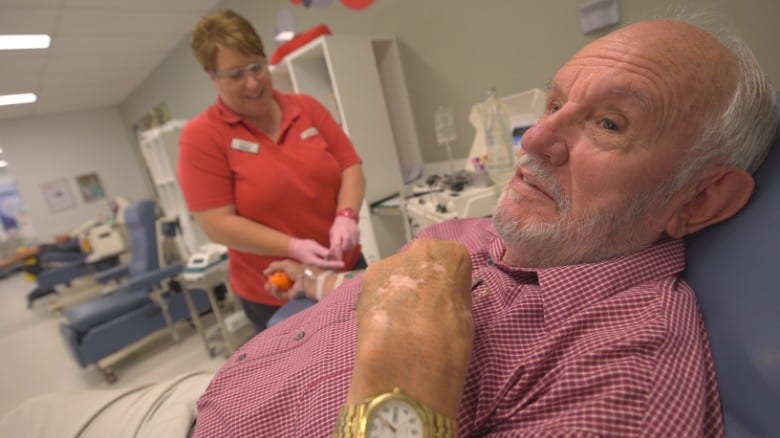 Australian James Harrison, aka “the Man with the Golden Arm”, has spent the last 60+ years saving lives.  According to the the Australian Red Cross Blood Service, for the last 60+ years straight James has helped save the lives of over 2.4 million babies by his weekly donation of his rare and healing blood.

James is one of only 50 reported people in Australia whose blood contains rare disease fighting antibodies that are used to create what is called “Anti-D”,  an injection to help fight Rhesus Disease, a blood disease that can occur in pregnant women, resulting in the mother’s blood destroying the blood cells of their unborn baby.  If left untreated these babies can suffer brain disease or death.

James understates his contribution, stating,  “It becomes quite humbling when they say, ‘oh you’ve done this or you’ve done that or you’re a hero,'” Harrison said. “It’s something I can do. It’s one of my talents, probably my only talent, is that I can be a blood donor.”  To the lives of those he’s saved his talent is anything but miraculous and his selfless weekly act of donating blood is more likened to that of a Super Hero.

This past May, 2018, James reached the age of 81, which is the cut off age in Australia for giving blood.  I imagine this is a bitter-sweet close of a chapter for James.  For a man who has said he really hates the sight of blood and doesn’t like pain his act of grace, peace, and purpose is inspiring.  This is a good reminder for me that its time to make another donation.

Source: He donated blood every week for 60 years and saved the lives of 2.4 million babies, by Doug Criss, CNN,  and Contributor Samantha Bresnahan, CNN.  May 11, 2018

Whether your blood type is rare or universal, it ALL matters.
CONTACT:  The American Red Cross to find out where and when the next Blood Drive will be going on in your area.